By Unknown May 10, 2009
On Orthodox Easter, Reggie introduced to me some of the traditional Russian foods eaten for this holiday. I kind of had an idea of what she'd prepare because she made me side foods before like carrots and onions marinated in vinegar. I asked her to help me out with this entry (her words are in italic) because I don't remember everything that was in each dish. Thanks Reggie <3

Kvas tasted way better than root beer! The awards on the side of the bottle proved it: 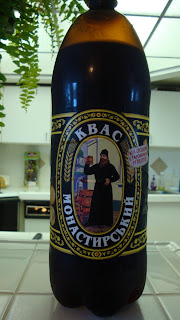 I absolutely loved the strong vinegar taste to this salad, I miss it: 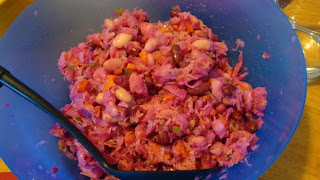 This potato salad tasted like any other potato salad I've tasted except it was lightly flavored. I liked it this way because anyone could put as much pepper as they want to suite their taste buds: 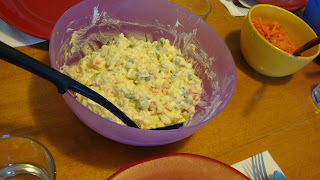 The vareniki reminded me of the Chinese gyoza dumplings except there were potatoes inside instead of meat. The countries are neighbors so it would make sense these dumplings are influenced by China.
The vareniki were also lightly flavored and tasted yummy dipped in sour cream!
Here's Dan frying the vareniki: 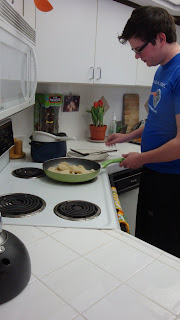 Name: Plov
Contents: beef, long grained rice, carrots, onions.
All cooked in a cast iron pot.
& then a side dish of pickles tomatoes.

I remember Reggie told me a lot of foods and soups taste better with sour cream. Its a Russian custom! I'm only used to pouring sour cream on burritos, tacos, and baked potatoes. Anyways I put the sour cream over the Plov and couldn't stop eating it!
These are the rest of the meals and Reggie's arm haha: 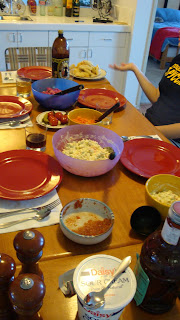