By Unknown June 10, 2009
During the last week of May, Bronsen and I went to Hawaii (my third trip) for vacation / family time / to eat! From my experience so far from eating Hawaiian local food, it consist an influential mix of traditional Hawaiian, Chinese, Japanese, Korean, Filipino, Polynesian, Portuguese, and American foods. If you're fond of any those ethnic foods like me, its like food heaven in Hawaii!

We flew on our favorite airline, Hawaiian Airlines. Bronsen was hoping to get a nice meal than a snack because he always has a big appetite. His wish came true, the complimentary meal came with pasta with vegetables and vinegar dressing: 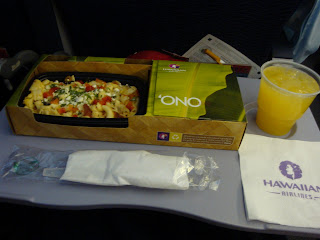 and a big brownie!: 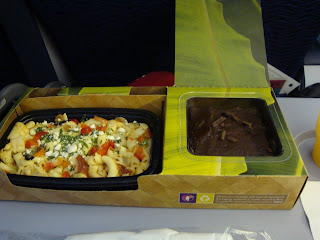 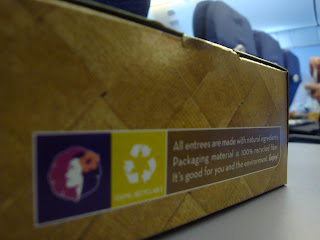 One night I was craving for saimin (ramen) noodles and spam musubi, a popular Hawaiian snack simply made with a block of rice, topped with a slice of spam, and wrapped in dried seaweed. Unfortunately, you can't see the noodles, its covered by the pork. I think there was more meat than the noodles! Hawaiians sure do love meat: 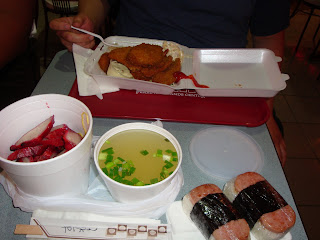 Close up of the spam musubi wrapped in plastic: 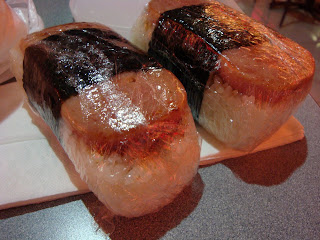 We made a lot of visits to Zippy's, the only Hawaiian fast food/restaurant that's open 24 hours on the island. It would be nice if Zippy's opened locations in the U.S. mainland like L & L Hawaiian Barbecue, but I think Zippy's should stay as, 'what you can only find in Hawaii.' There's so much choices they have on their menu, I still have yet to discover my favorite meal. I recommend trying their famous chili, its so popular that they're shipped frozen to the mainland. You can buy them at the Hawaiian foods aisle at certain CVS locations. I also recommend their Zip Pac consisting of teriyaki beef, Spam, mahi mahi & fried chicken on rice with furikake and daikon. You get to sample all the delicious meats and fish and lastly, Korean Fried Chicken. It was Bronsen and Mikey's favorite meal, they loved it so much they went to every Zippy's on the island to see who made the best Korean Fried Chicken!: 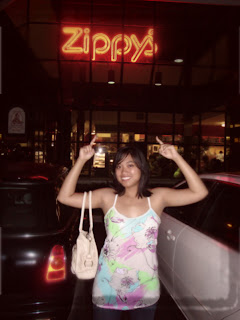 This is the Deep Fried Mahi Mahi plate with two scoops of rice and macaroni salad. I don't know if I was really hungry when I ate this because I wished there was more fish!: 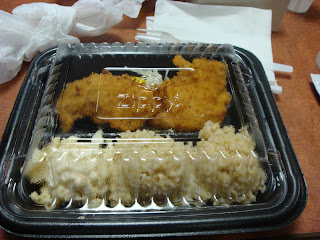 The Veggie Tofu burger tasted way better than I expected. I really liked the bread and vegetables that complimented the burger: 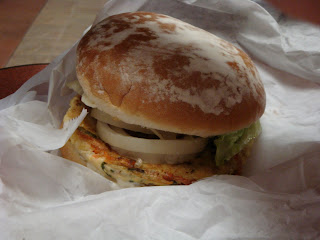 The big white steamed buns are a type of dim sum or pupu called, Manapua. Inside the bun you can put any meats or vegetables. Manapua has many names to it depending where one is from. I'm used to calling it by its Filipino name, siopao. The medium sized, light brown dumplings are called pork hash. These dumplings are originated from Asia and have their own distinct flavors: 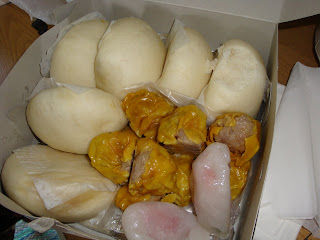 When we were at the popular tourist central spot, Waikiki, I remembered from watching the Travel Channel one of the the travelers went to Tiki's Grill and Bar. I was curious to see if the place lived up to its hype and I already agreed upon entering! The restaurant was beautiful and had a great view of the ocean. Tiki's is known for their specialty drinks, so I tried the "Lost" Lava Flow, made of light rum, a tropical blend of coconut milk, and pineapple juice with fresh pureed strawberries. When I got the drink, I drank it right away and realized half way into drinking it, I forgot to take a picture!: 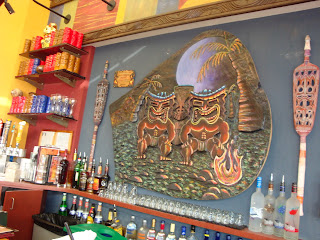 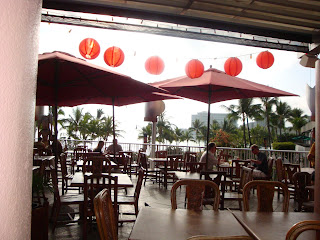 I decided to eat 'Ahi Poke, which are chunks of fresh yellow fin tuna seasoned with Hawaiian ogo seaweed, soy sauce, and sesame oil. I wish my parents fed me sushi and poke when I was kid. They don't like raw fish so they never fed me it. It wasn't until I was in college when I got the chance to eat real sushi and poke. I prefer raw now over cooked fish now: 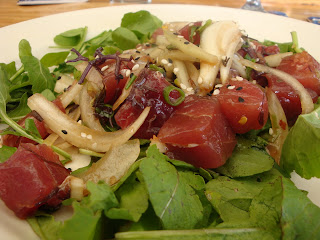 I couldn't believe the price of orange juice when I was at a grocery store. $6.99 per carton! That's ridiculous!: 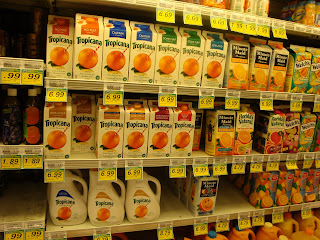 Hawaiians love to drink especially Anthony Boy! To the right is the Tequila Sunrise made by him: 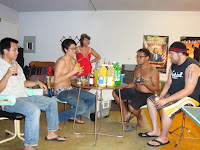 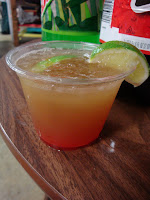 One morning we visited Mike at his summer job at Ben & Jerry's. I really didn't want to eat ice cream for breakfast, but I couldn't resist the temptation. I tried the Coffee ice cream. It was very smooth and the coffee taste was light, which I prefer: 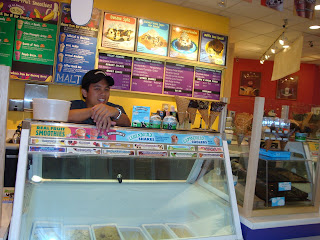 Before going on a long hike, my friends and I ate at L & L Hawaiian Barbecue. I've ate here plenty of times at Las Vegas. There's a difference of course, L & L food taste better where it originally came from. 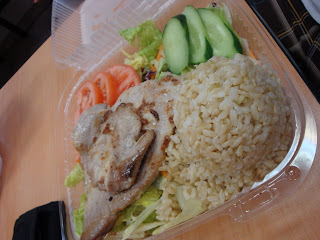 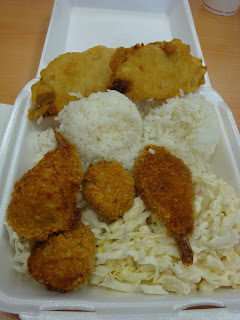 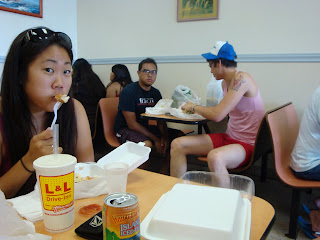 After the hike, we needed gas and stopped at 7-eleven. What makes Hawaii 7-elevens unique is that they sell spam musubis, sushi, and other Hawaiian snacks. I wish the 7-elevens here in the mainland sold these foods too: 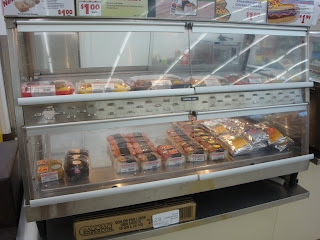 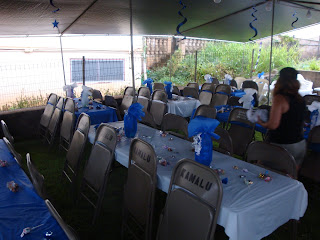 When uncle was about to uncover the food I was ready to take a picture, but then everybody rushed in line to eat! People were in the way so I couldn't get the pictures I wanted: 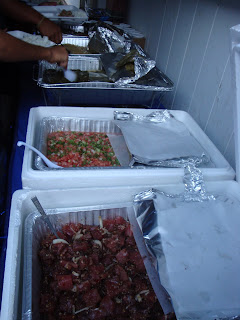 The desserts served were huapia, made from coconut and to the left were sweet potatoes: 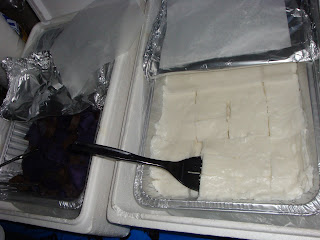 I took a sample of each food. Starting from the top left is:
poi made from taro root, its equivalent to rice. Poi can be eaten with anything or by itself. Next to it is kalua pig. Kalua is the cooking method of using the underground oven, imu. Its a primitive way of cooking, yet complex. To the right is chicken long rice noodle, the dark sauce next to the rice is squid luau. Its made of young taro leaves, coconut milk, and squid and is cooked until creamy. Squid luau taste good on top of rice! To the right is 'ahi poke and lomi lomi salmon, a tomato and salmon salad. 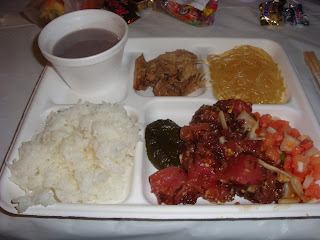 At Hale'iwa, I tried some Hawaiian shaved ice. The syrup flavors I chose for my rainbow were blue Hawaii, mango, and piña coloda. Its so pretty: 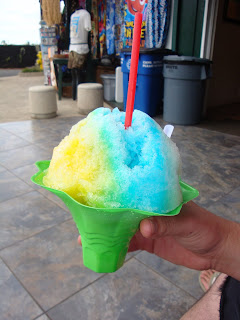 If you're a shrimp lover, go to North Shore where there's shrimp trucks that cook up their own special shrimp dishes. One of the most popular trucks is Giovanni's. The sauce they add on their shrimp is what keep customers coming back for more. As you can see from the truck, people get to write on it: 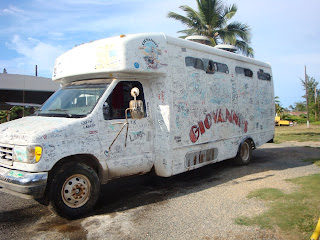 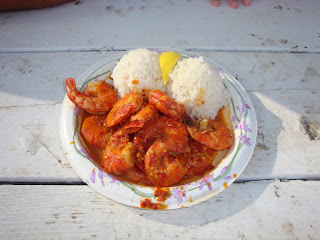 On our last day on the island, we were at Kaneohe looking for a place to eat for breakfast. All I wanted was to eat a big omelette! Bronsen suggested we go to Times Coffee Shop, so we went. It looked like an other cafe, but with Hawaiian decor such as framed pictures of Hawaiians and beaches everywhere. Here's Bronsen on his phone while waiting for the food: 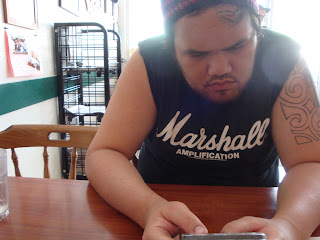 I ordered a veggie omelette with fried rice. Their portions were big enough for me! The omelette was fluffy and the fried rice was quite sweet: 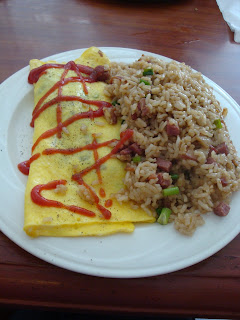