By Unknown September 30, 2010
One evening I went to pick up dinner I ordered down the street from my home.  After I got my dinner, I saw this taco stand put up in front of Taqueria Santander.  I thought to myself its late at night, the street lights are dim, and there's men surrounding the taco stand... I'll go try a taco!  I went up to the stand as was greeted in Spanish (I don't think they could see me well so I went closer to the light that was on the grill).  A man asked me if I wanted carne or ____?  His accent was thick so I asked what else they had other than beef.  The man said intestine.  I chose it... I figured I've had enough beef tacos, I'll try something new.  The man smiled and gave me two thumbs up haha.  While he was preparing it the other men were making conversation with me.  One asked if I was Filipina, if I was from there, and so on.  I replied in Spanish to some of their questions, I'm surprised I still remember!

Here is the taco de tripas with onion, cilantro, salsa verde, and lime: 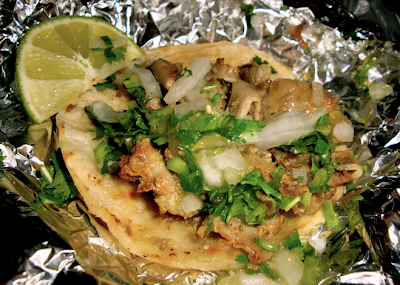 It was muy bueno and made me miss eating street food in Mexico and Philippines!  The intestines were cooked well and wasn't too rubbery because the flavor also finely masked it's 'rubberness'.  I'll be sure to stop by Taqueria Santander again when I'm in the mood for some Latino food :D