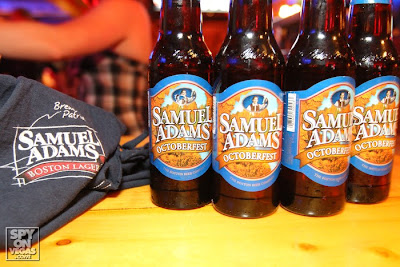 I finally went to Cadillac Ranch for the first time on my friend's birthday.  Before I entered the bar, a guard asked me if I came here because of Spy On Vegas.  I said I wasn't and wondered what kind of event was going on.  We sat at one of the bars and were asked if we wanted beer because it was free!  Spy On Vegas was giving out free Samuel Adams Octoberfest beers in honor of Okotberfest.  I could not refuse a free drink and celebrated in honor of the German celebration.  I also got a free shot of lemon drop - apparently this is a common shot that I never heard of until that night!  It tasted just like iced tea.  All the bartenders were nice, funny, and made my friend's birthday quite entertaining!

This place wasn't on my list of places to hang out at Town Square because I had heard their food was nothing to rave about.  I still tried an appetizer to confirm what I heard was true.  The birthday lady and I shared a chicken taquito dish garnished with shredded lettuce, tomatoes, and sour cream.  I think the quality of ingredients was fair, but I gotta give credit for CR's creativity because the taquitos were Americanized (aka B I G enough to be an entree to feed two people or more). Instead of the traditional skinny appearance, the taquitos were a bit chubby like egg rolls!

Overall I enjoyed my time at CR because the drinks were free, service was great, and I liked the atmosphere of the bar!