By Unknown October 09, 2010
I've been deprived of cheesecake for quite some time!  So I ate at the Cheesecake Factory last week.  I usually order the Low Carb Cheesecake with Strawberries - comes with whipped cream and is sweetened with Splenda®. I don't notice a huge difference between the low carb and The Original cheesecake except not feeling heavy after eating a slice of the low carb cheesecake.

After eating there, I still longed for more cheesecake!  I later found a scrumptious no bake cheesecake recipe from http://cottagemagpie.com/recipes/no-bake-cheesecake.  I made it and topped it off with Comstock blueberry pie filling.


I let my mom try it, who also gave some to my dog -.- she didn't believe that I made that cheesecake.  She thought I got it from Marie Callender's - I was flattered! 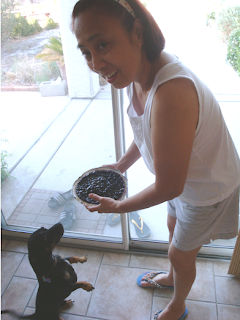