By Unknown February 17, 2014
Earlier this year we went to Oregon for a little getaway from the hustle and bustle of Las Vegas.  We were out and about in Beaverton, Portland, and Corvallis.  I, of course had to see which restaurants in these areas were good to eat at :

In Corvallis we ate sushi at Aomatsu and came in just in time for Happy Hour (8:30-10pm, Mon-Thurs).  Our favorite sushi roll from the Happy Hour menu was the Crunch Monster Roll, which comes with shrimp tempura, avocado, crab, cucumber w/ spicy dressing covered in crunchy dressing (panko): 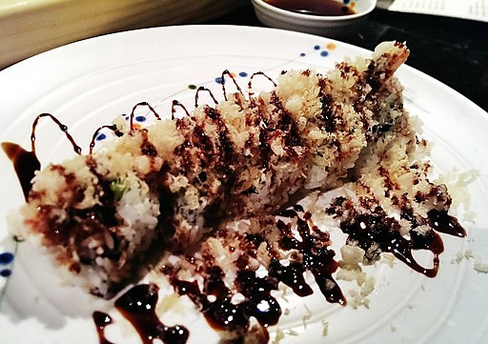 Since my husband and brother-in-law have big appetites, the Happy Hour items weren't enough so we got the Love Boat from the regular menu.  This entree came with shrimp and vegetable tempura, seaweed salad, Rainbow Roll, Tuna, Salmon, and Yellowtail Nigiri and Sashimi, and an eel roll: 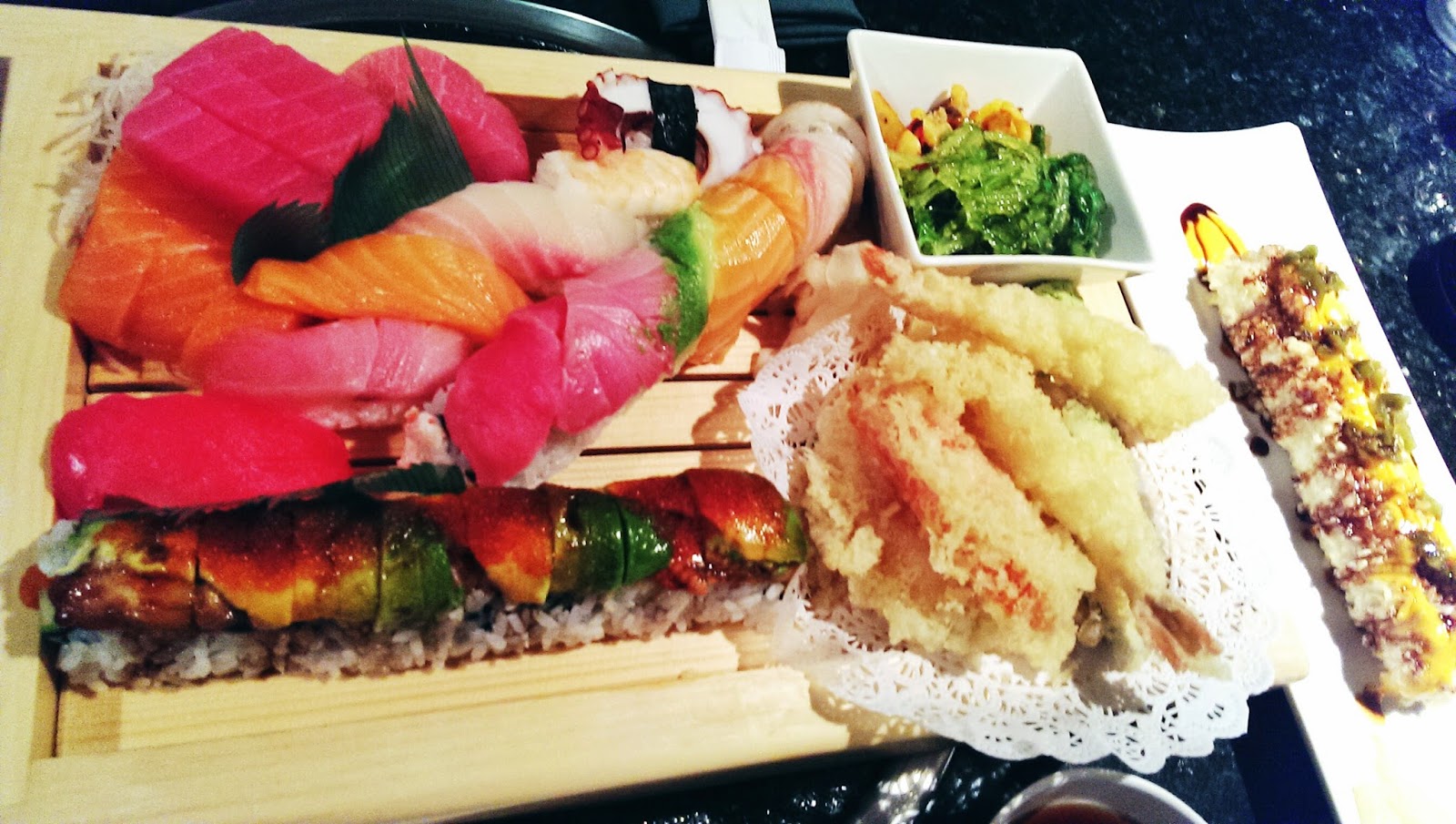 What I liked about Aomatsu other than the sushi was that they other offered Asian foods like Korean BBQ.  There was a separate area for the tables with the grills.

We dined a couple times for breakfast at The Mark since it was in the hotel we stayed at: 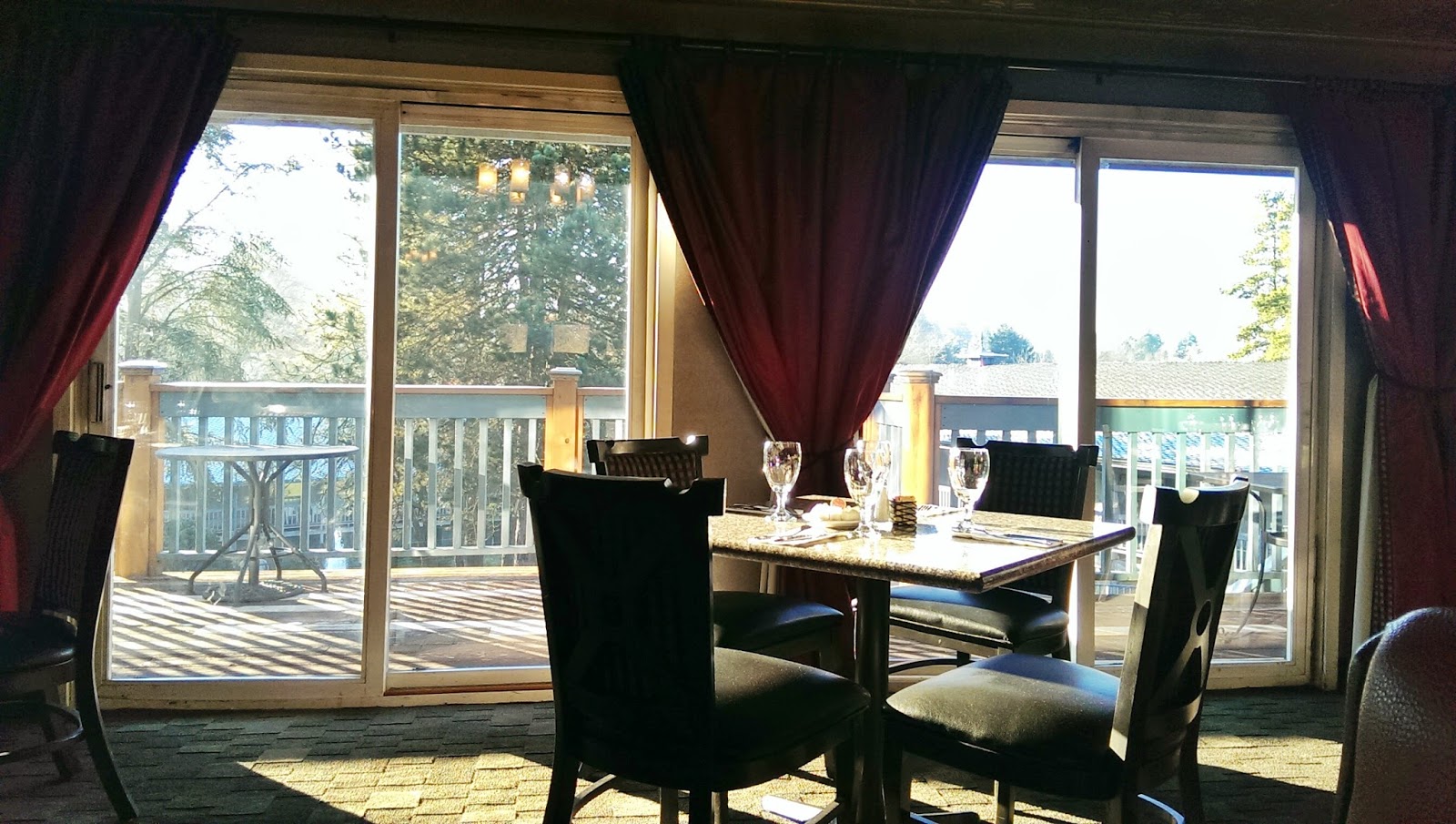 My favorite item was the Dungeness Crab Frittata-  along with the crab the frittata came with mushrooms, red onions, red peppers, fresh herbs, and lime cream on top.  I chose "Those Potatoes" and wheat bread to come with my frittata which complimented the meal nicely. 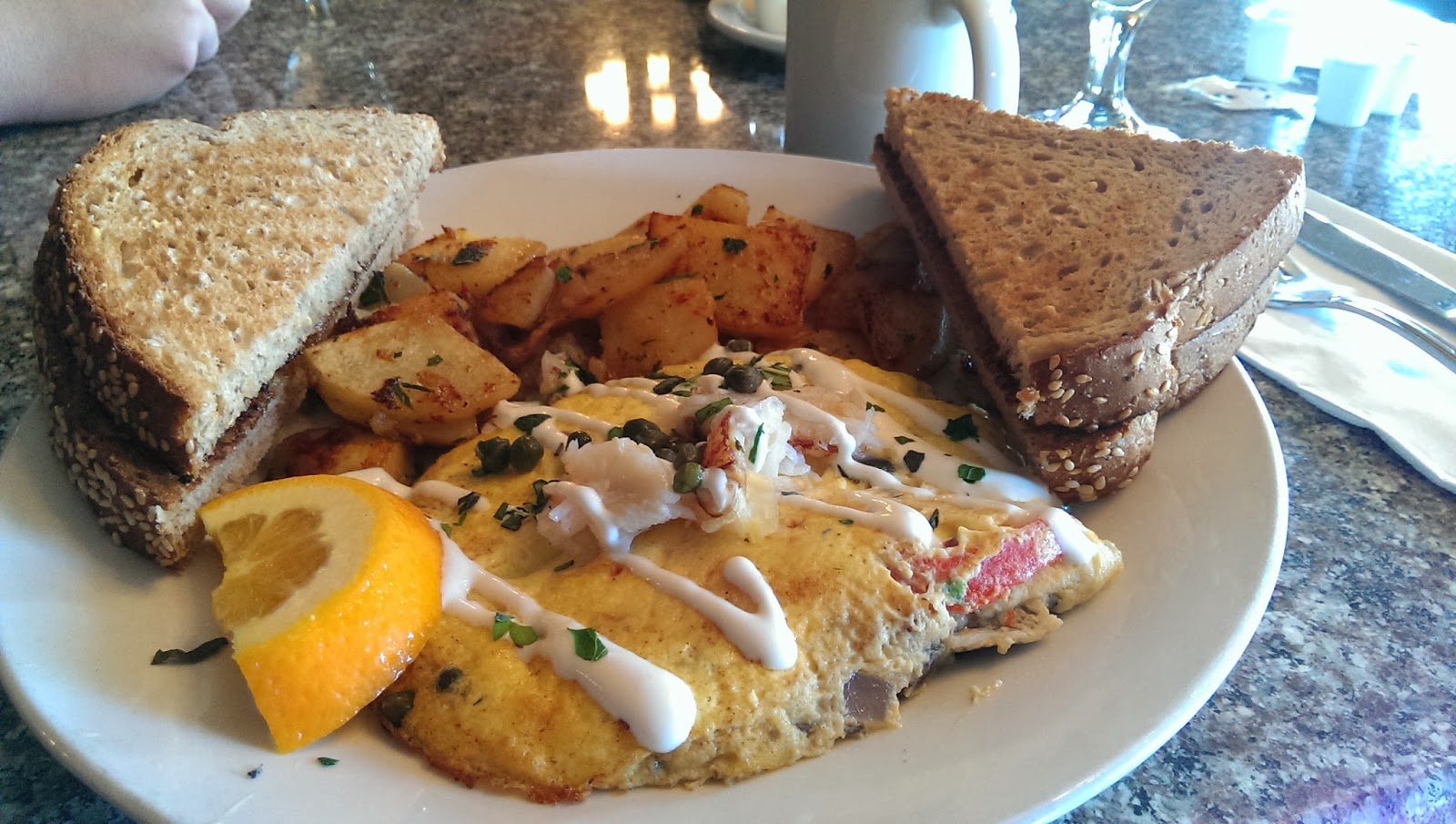 If you stay at the Shilo Inn, it comes with a daily complimentary breakfast at The Mark, but it is a very limited menu.  If you order any breakfast items off The Mark's regular menu, you'll get $3 off each item.

While driving around in Beaverton we saw this bright orange food truck called Erwina's Inasal Filipino BBQ and was curious what was on their menu.  I ordered the Chicken Teriyaki (left) and the Roofer's Special (Bicol Express)- comes with pork, chili, and green beans cooked in coconut milk.  The last time I had this dish was when I was in the Bicol region.  I was kind of nostalgic eating this Roofer's Special and I enjoyed it, which had a hint of spiciness (Bicol region is known for their spicy cuisine): 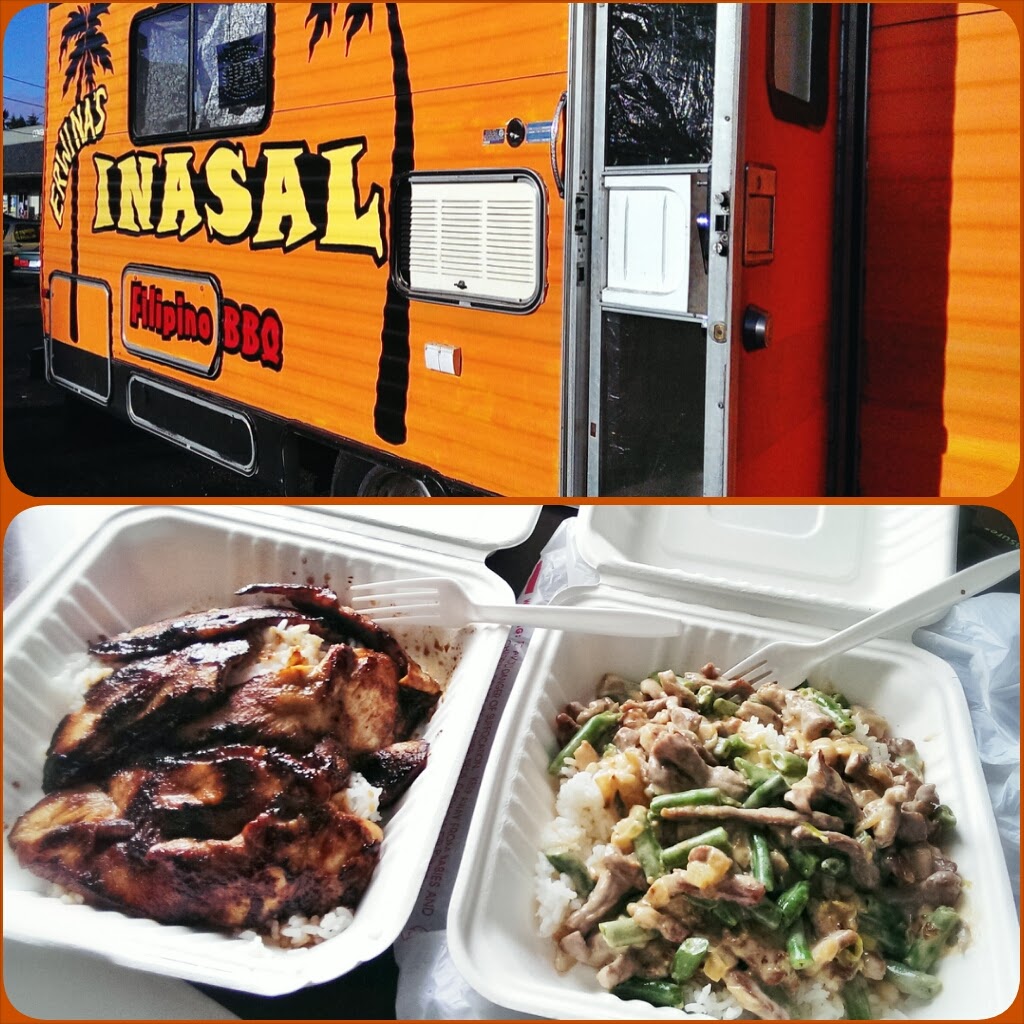 I was glad to see this food truck,  I think if I ever lived in this state I'd miss eating Filipino food since there's not much of these restaurants compared to Las Vegas.

Since it was a cold night in Portland we figured eating a warm, hearty dish of curry would be good for our tummies so we went to check out Kalé.  I really liked the Japanese decorations all over this casual restaurant.  I ordered the KALÉ® RICE ORIGINAL- no meat or broth, made with just vegetables and a side of a hard boiled egg: 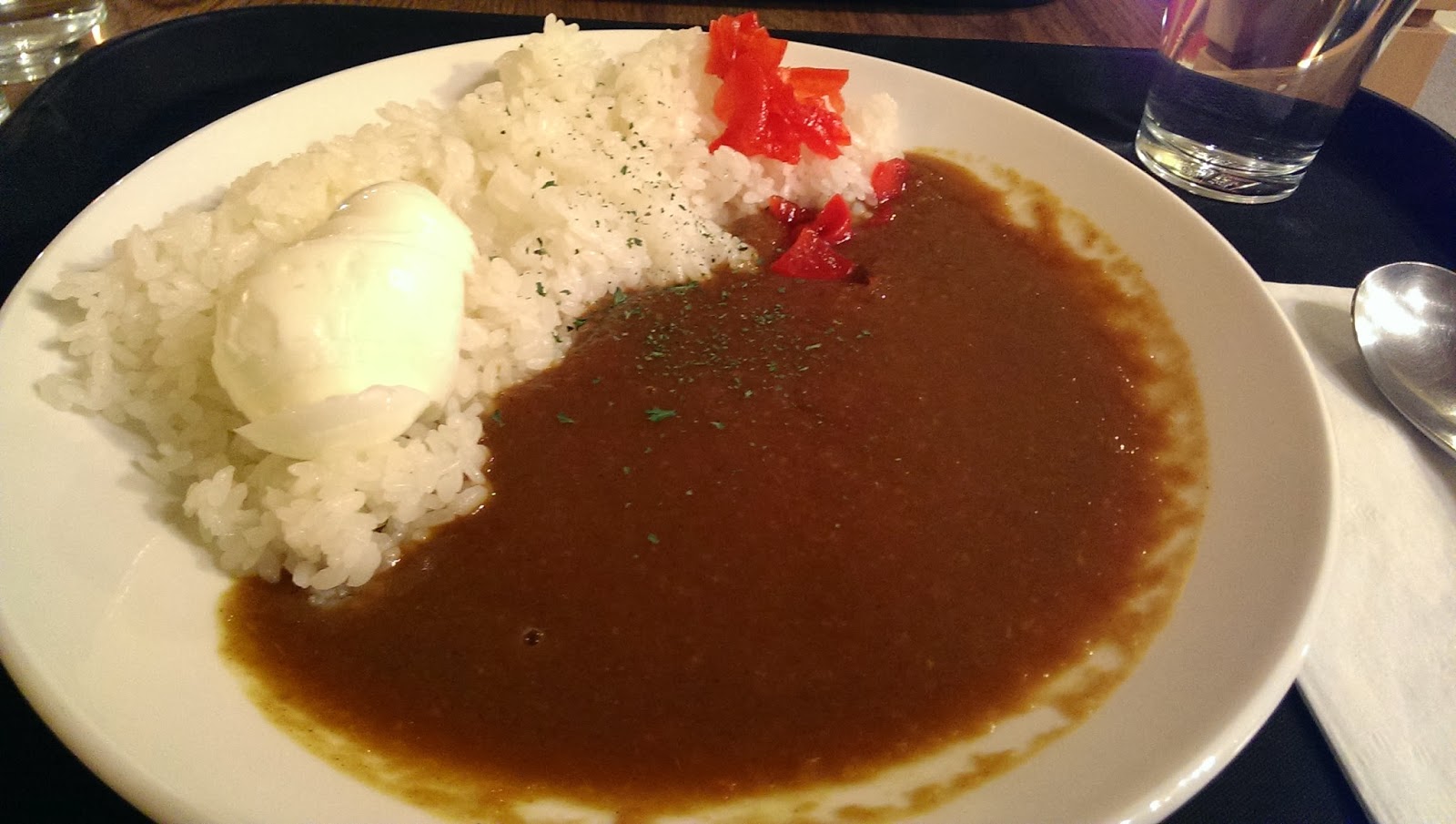 This curry hit the spot!  I was quite content :)

The next night we decided to have dinner with our friends at a Cena Ristorante.  a Cena (a chay na) Italian means 1) verb. 'come to supper'; 2) noun. an Italian restaurant located in the Sellwood neighborhood of Portland, Oregon.

The other appetizer we had was Frito Misto (top right pic)- lightly fried prawns, scallops, calamari, and lemon-caper.  The way they fried the seafood was delightful- was a bit fluffy to me, but still had a crisp.

For my entree, I had the vegetarian dish, Pappardelle (bottom right pic)- hand-cut spinach pasta, delicata squash, brussel sprouts, olive oil, garlic, and parmesan.  I chose this dish because I prepared spinach pasta horribly at home once and wanted to see what it is suppose to taste like!  The spinach pasta was soft, not al dente like regular pasta, and it's flavor wasn't "spinachy", it was more subtle and I tasted the spices more. 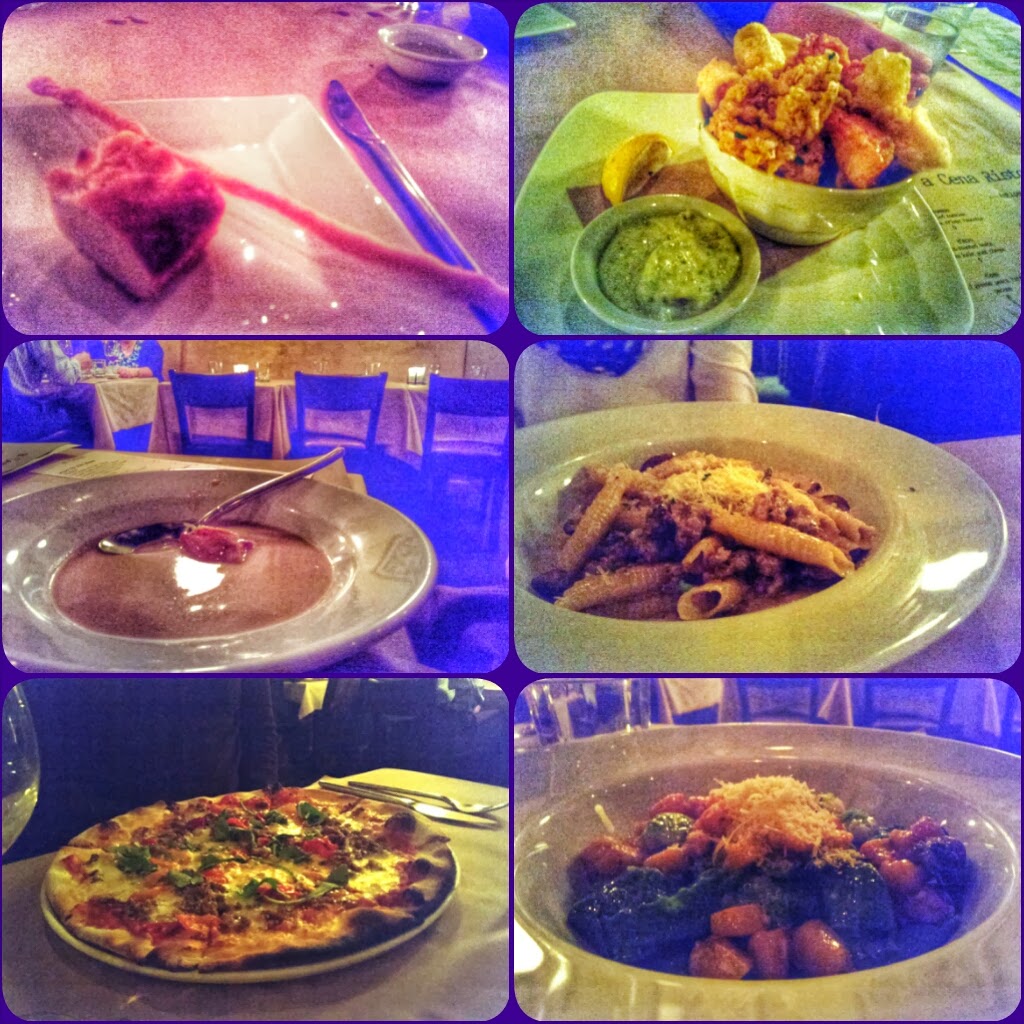 If you read the 'About' section of their website, you'll find that a Cena values fresh ingredients, gets their food from local farmers, and etc.  Thats when you know a restaurant is really good!  I'm glad we came across this restaurant during our visit.

The last place in Portland where we got food was at Voodoo Doughnut, I wasn't leaving the city until I got a least one doughnut from this famous doughnut shop!  The line was long, but quick.  They had a lot of unique items on their menu.  We saw interesting doughnuts like Bacon Maple Bar doughnut, Captain my Captain doughnut- raised yeast doughnut with vanilla frosting and Cap'n Crunch, The Loop doughnut- yes, a doughnut with Fruit Loops on top, and Neapolitan doughnut- chocolate cake doughnut with vanilla frosting, strawberry dust, and marshmallows in the middle.

Since I love to eat doughnuts with cream inside them, I got the Portland Cream doughnut- raised yeast doughnut filled with Bavarian cream and topped with chocolate and two eyeballs, representing the vision of the great city of Portland.  We also got the Memphis Mafia doughnut- fried dough with banana chunks and cinnamon covered in a glaze with chocolate frosting, peanut butter, peanuts and chocolate chips on top!  The last one we got was the Old Dirty Bastard doughnut (RIP ODB)- raised yeast doughnut with chocolate frosting, Oreo's™, and peanut butter.  Just describing what were on these doughnuts lets you know they were amazing: 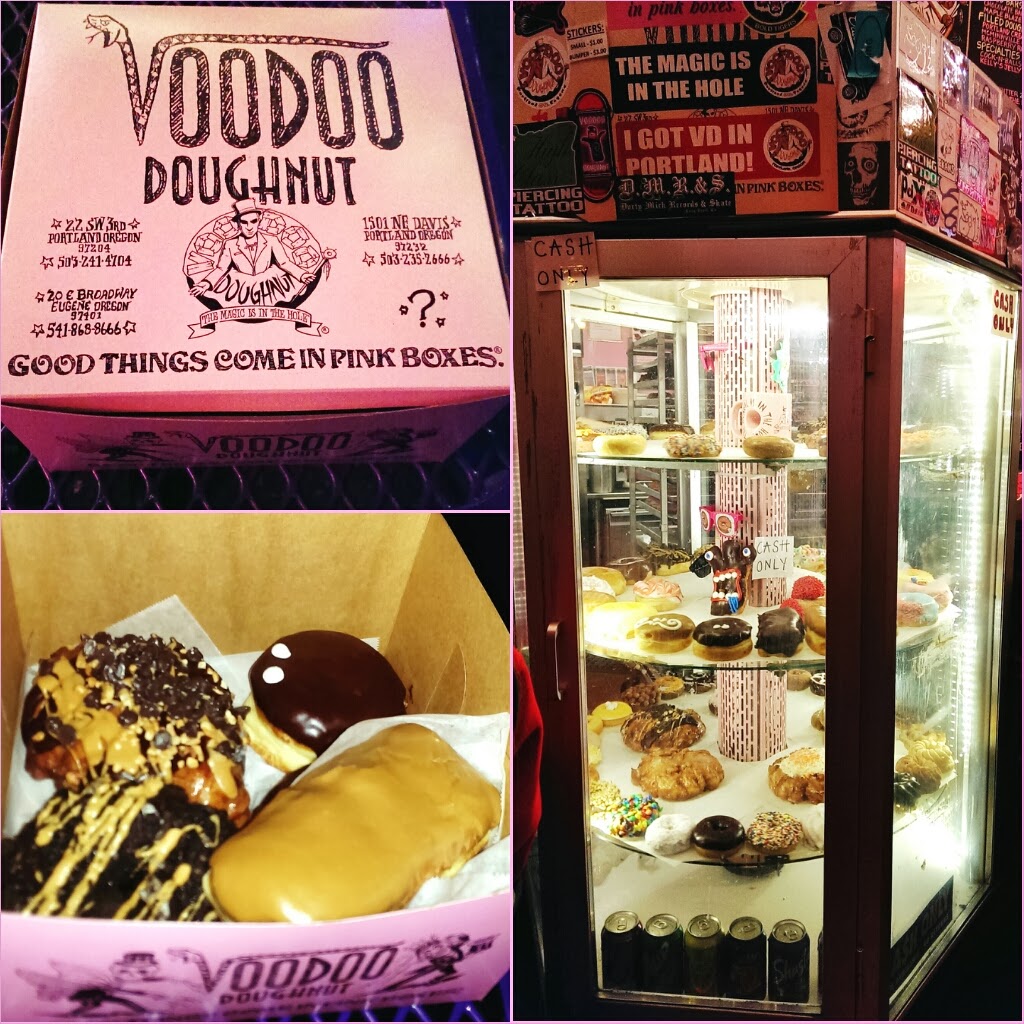 They also serve vegan doughnuts, so there's something for everyone!  Later on we decided to bring a box of these lovely doughnuts as our carry-on on the airplane.  While we were leaving, I forgot to get a bag for our box.  So when I was at the airport and airplane, the pink box caught MANY people's attention, both passengers and airline crew.  I held on to my pink box of doughnuts for dear life!  But then again it was a great way for promoting these doughnuts!

While we were exploring the areas surrounding Portland, we ate at Elmer's Restaurant for breakfast in Beaverton.  There was a chimney near the entrance, I guess they wanted us to feel at home!  Since hazelnuts in the US come from Oregon, I just had to get the Oregon Hazelnut Pancakes- buttermilk pancakes topped with hazelnuts and powdered sugar.  It only comes with maple syrup, but I wanted to try the pancakes with Marionberry syrup since this berry is also cultivated in Oregon haha.  Our waitress was nice to give me both syrups: 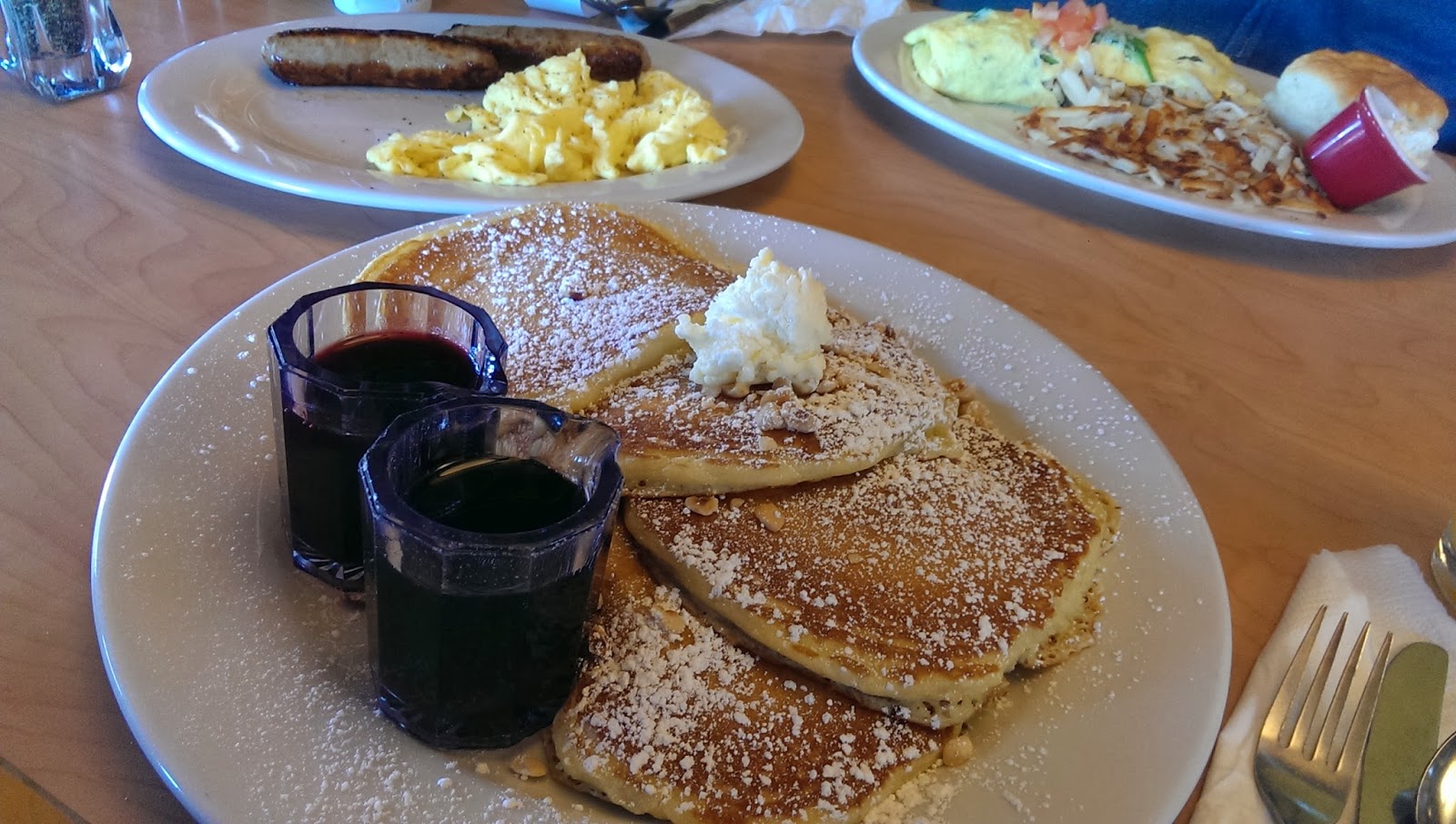 This was a great family restaurant.  They even had baby slings, I don't think I've seen those in a restaurant in Las Vegas other than high chairs.  Anyways, if you're craving for a delicious breakfast go to any of the Elmer's Restaurant locations!

On our way back to Eugene Airport, we stopped by Corvallis again and ate at Laughing Planet.  I admire this restaurant's principles - they believe in a more environmentally conscious, eco-friendly, community-driven world (read more here).  When you see their menu, you'll see that their foods have a lot of nutritious ingredients in them.

I got the Marionberry Ginger Smoothie- marionberries, fresh ginger, banana, and apple juice (all good for you!) and the Thai Bowl- baked organic Surata tofu, garlic green beans, steamed broccoli on brown rice, topped with a cilantro lime slaw and Thai Lemongrass Peanut sauce.  This dish was so rich in healthiness and deliciousness! 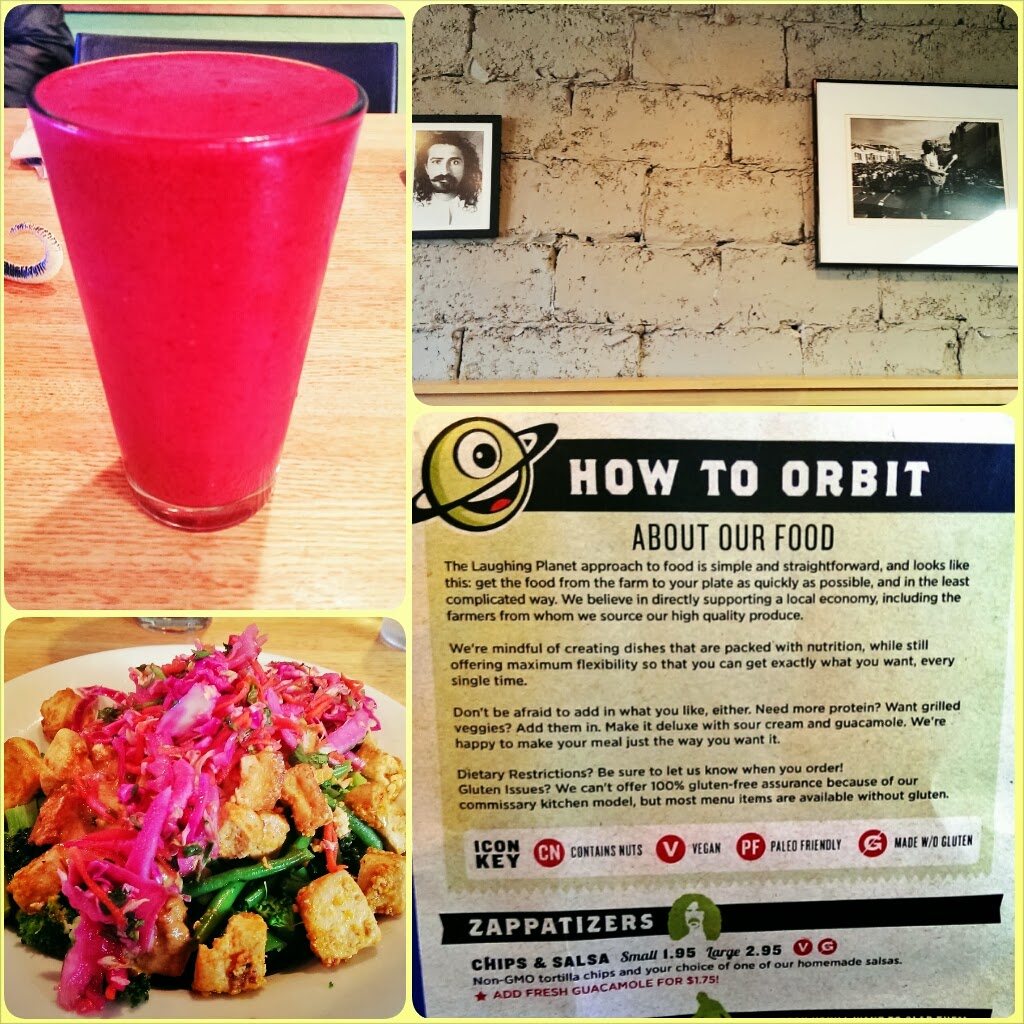 I also liked how there were photos of Frank Zappa throughout the restaurant ;)

I enjoyed my second trip to Oregon, wish I stayed there longer!  Maybe I should just live in Oregon haha.  To see what I ate during my Oregon trip from last year, click here